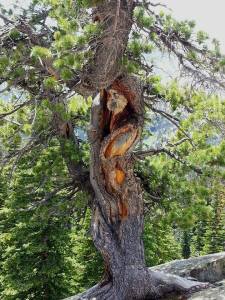 During a hike with my husband yesterday I had an epiphany.  Not a huge, life-changing epiphany, but a small, heart-warming one that has helped me see my surroundings in a different light.

I have been hiking for years and have always enjoyed breathing in the fresh air of the outdoors and admiring the world around me.  I like to think of myself as someone who is aware and grounded.  In touch with nature.  But as I was hiking yesterday I started to look at the world as a writer.  I thought, how would I describe what I see to someone else?  How would I describe it in a book?  And suddenly I saw the world with a different lense. Each flower, each rock, each tree challenged me to think more descriptively – more aware of the details and beauty hidden directly in front of me.

Instead of telling you what a nice day it was and how pretty the flowers were, I am going to describe the beauty in the words that flooded my mind.  Words that came to me so naturally for the first time.

The trail was rocky and veined with roots as it wound through a forest of pines, firs, junipers, spruce, and aspens.  At first glance their bark looked dull and muted, but looking closer I saw various shades of browns and greys interspersed with the white and black of the aspens creating a soft palette for the eyes.  Some of the trees had had their bark stripped from their trunks – by time, animals or weather – and underneath the bark lay a smooth surface.  Dried sap created a sticky and lumpy trail down the side of some, while others were disfigured by knots and insects. The bright green tipped spruce trees offset the drabber green of their pine tree neighbors.  Then there were the poor trees that have suffered from pine tree beetles and have lost the battle to survive, the green completely sucked out of them.  But even the brown lifeless needles shone like newly polished copper as the sun struck them at just the right angle.  And what of the trees that have long since been downed by wind and storms?  They lay dead and grey among the living forest, their many tangled branches like desiccated, gnarly, appendages reaching their ghostly hands to their brethern.

The forest floor was carpeted in vibrant green of various shades as hundreds of indigenous plants crowded together.  M

any different varieties and species living in harmony.  There were tiny purple and white flowers with miniature scalloped petals that belong in a fairy tale.  Dark green plants with thin blade-like leaves striated with burgundy shadowing and burgundy stalks swaying in the wind next to prickly thistles and bright lively ferns.  Yellow daisies and snap dragons make their home next to the bright pink primroses and small white flowers that looked like miniature popcorn balls at the end of their stalks.  There were leaves in myriad shapes and sizes – star-shaped, oval, forked and round – some looked so fragile they might blow away in an instant and others so sturdy they might withstand a hurricane.

The rocks along the trail and in the forest had their own personalities. No longer dull and boring grey lumps of granite inviting me to stub my toe, each one had it’s own character. Light green lichen spotted and spread on many, and occasional veins of pink and white quartz made an appearance on others.  Speckled in bronze, grey, black and silver, they line the trail and mark the passage of time not in years but in eons. Giant boulders huddled among the trees, some split in half and carved into their current shapes centuries ago.

Along with all the details and beauty of the plants and rocks, I also noticed the many sounds that surrounded us.  The light breeze whistled gently through the trees, occasionally causing some of them to rub against each other creating a haunting, creaking sound.  Birds chirped their songs as the woodpecker added his own pecking rhythm.  When we passed various streams I couldn’t help noticing the gurgling of the water as it trundled over stones and roots, at times the sound deepening as it wandered under larger boulders creating an echo that was both soothing and strange.

Reaching Lion lake at last the view was spectacular.  There were still small patches of snow on the trail and on the side of the mountain.  Each patch wind swept with streaks of dirt, pine needles and human foot prints, adding it’s own beauty to the big picture around us.  Clusters of pink and white flowers decorated the bank of the lake as the picturesque peaks stood watch over the scene.  The water was crystal clear and rippled lightly as the wind danced over it’s surface.  Sometimes green, sometimes silver, sometimes a deep shade of blue, the ripples sparkled from the sun light.  Rocks strewn in the lake bed near the shore were tinted orange from the iron present in the high mountain lake.

As I looked up I admired the azure blue sky streaked with a few happy white clouds (as Bob Ross would have described them).  I could smell the pine trees with a hint of vanilla, earth and sun, blended with all the green of the surrounding vegetation. I wish I could have captured the smell and taken it home with me.

We go through life often times not noticing the small things that make up our world.  There’s so much beauty in even the smallest things.  I’ll be paying more attention from now on – not just so I can write about it later, but so I can appreciate the small moment of peace and joy that I feel when I truly see the beauty around me.  So take a look around wherever you may be.  What do you see?

View all posts by 4wardjourney